With the release of Mockingjay Part 2, the Hunger Games franchise has come to an end.

Even though it stays true to the story, there are certain changes that are significant.Here are the 4 biggest differences between the movie and the book:

1: Less of the character Plutarch

Philip Seymour Hoffman died during the filming of the final installment. This meant there was no way apart from lessening his role. This included a scene where Haymitch read a letter to Katniss sent by Plutarch. 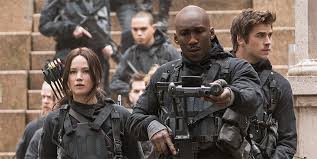 Effie has been around during both Mockingjays than in the book where her character appears at the very end. This is clearly because of Elizabeth Banks’ performance. Yet the most surprising part comes when Effie and Haymitch kiss since no mention of a relationship was made prior to this.

3: Johanna and Katniss don’t train for the war

In the book, Katniss is denied by Coin to go to the Capitol to fight because she hasn’t undergone training. Of course, Katniss passes but Johanna doesn’t. Of course, this doesn’t happen in the movie as Katniss sneaks off to the Capitol with Johanna’s help.

Both the book and movie drive home the fact that the revolutionaries and the Capitol are no better. While Katniss considers the protection of civilians in the Capitol important, this means leaving out an important part in the book. She kills a civilian to protect her unit’s discovery when she is recognized as they escape the sewers.