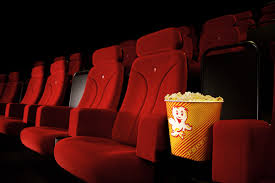 What better way to escape reality than to dive into the realm of movies? When you first step foot into the theatre and the lights are down, the ability to forget about the world outside the doors becomes effortless. Time is lost and the mind is freed from the pressures of reality. The characters plights become more important than your own, and the movie takes hold of you. For a few hours, buttery popcorn and bubbly soda help you slide away from any worries you may left at the ticket counter.

People have enjoyed going to the movies for over a century. The first movies were a series of photographs shown in rapid progression to create movement. Once motion picture cameras were invented, more life like movement shaped an entrancing experience for the first audiences. Eventually sound and color were added to bring the entire event to life. With today’s advancements in computer generated imaging, movies take on a whole life of their own.

The general public has long been entertained by the motion pictures they delight in, as well as the actors and actresses who play their favorite roles. Magazines, tabloids, and television shows are always out to capture the artists in any given situation. From marriage to child birth, and especially throughout the process of bad decision making, the public loves to read and hear about the lives of Hollywood Stars.

The entertainment value of motion pictures and those who create them will always be on the rise.