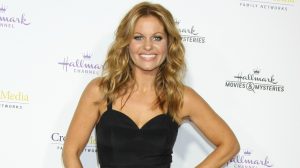 Candace Cameron who is in the current Netflix series “The Fuller House” is said to be harboring a teenage crush on Joey McIntyre from the New Kids on the block.

The actress couldn’t help herself at the iHeart80s Party and gushed over the group to ET’s Nischelle Turner.

She said that when she saw them perform she felt like she was 15 again. She went on to say that she was a “Joey girl”, but now she has a crush on them all. This happened after the group played themselves in a recent episode of the show. The group also performed some of their biggest hits like You Got It (The Right Stuff)” and “Please Don’t Go Girl.” The actress also confessed that she has seen them every year when then are on tour.

The fuller house actress, 40 has been happily married to the former hockey star Valeri Bure. The star said that her busy schedule means that she finds it hard to spend time with her family, but she is looking forward to filming The Fuller House again as it will mean she will be home for 7 months.

The actress is looking forward to spending quality time with her hubby. She went on to say although she isn’t a big fan of Valentines Day; she is planning something special for this year.